Welcome to the launch of The Reading Road website! Actually, my real reading road was launched long ago. There may have been detours and sinkholes, but there have been bridges to rare adventures, too. The Reading Road and the writing life are like fraternal twins; so it often happens that I cross a bridge from one to the other.

One thing always leads to another. Days spent observing and photographing bees led to a seed of an idea for a children’s book. Dale Carnegie’s words, “When life gives you lemons, make lemonade!” came to me. Life in the form of a lemon tree literally gave me lemons; so I decided to tweak the famous quote’s meaning and write about the connection between pollination and that delicious tart/sweet summer drink. Then there was the leap to a USDA lab; but I’m getting ahead of myself. Maybe you would like to follow the progression, winding and circuitous as it has been, to the first digital book I have compiled from endless curiosity and countless hours learning new science and technology. This is the sharing of an experience – of a light-bulb moment which affects us all in a fundamental way. We all love to eat, and eat to live; and this is how my book began.

It happened again this past spring when I left the laundry, the phone, the correspondence on my desk, and other urgencies to heed the siren call of our courtyard. Out there in the lushness, the wings of my imagination unfurl. Some satellite beams connections, and I start to write in my head. Why there? It’s because the air constantly telegraphs sounds and scents. New sights, new colors appear like the turns of a kaleidoscope, and I rush to capture them somehow. The whip of a tail, the snap of a jaw, and a satisfied chameleon has rid my roses of another thrip. I practically trip over a regiment of ants working in sync, like ancient Egyptian slaves hoisting stones to their destination. 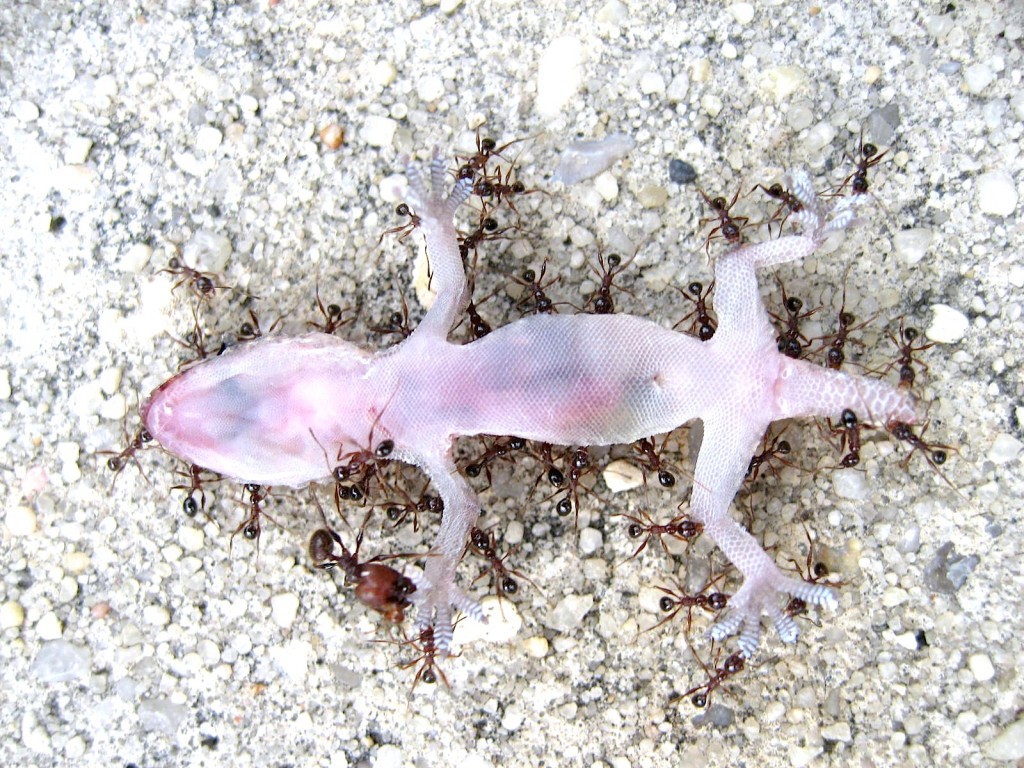 Only, their burden is actually an expired chameleon, not so lucky as the one a moment ago. All this life circling and circling, mindless of me, focused, driven, accepting of their lot! And then I hear the buzzing, and I’m drawn to it.

It’s early morning when the white and pale lavender of mint and basil blooms are still dripping dew. Bumblebees, like fuzzy, fat dirigibles, bump into one another, zooming in and among the herb pots with a drone that can be heard above the bubbling fountain. Our blooming lemon tree sports an undulating wreath of bees. They often collide, quickly maneuver backward before re-directing flight, then alight to take long sips of nectar, dipping into each bloom head along each stalk. All this crawling and positioning, right-side up, upside-down, frantically buzzing and drinking as though this might be their last meal, gets me running for my camera. 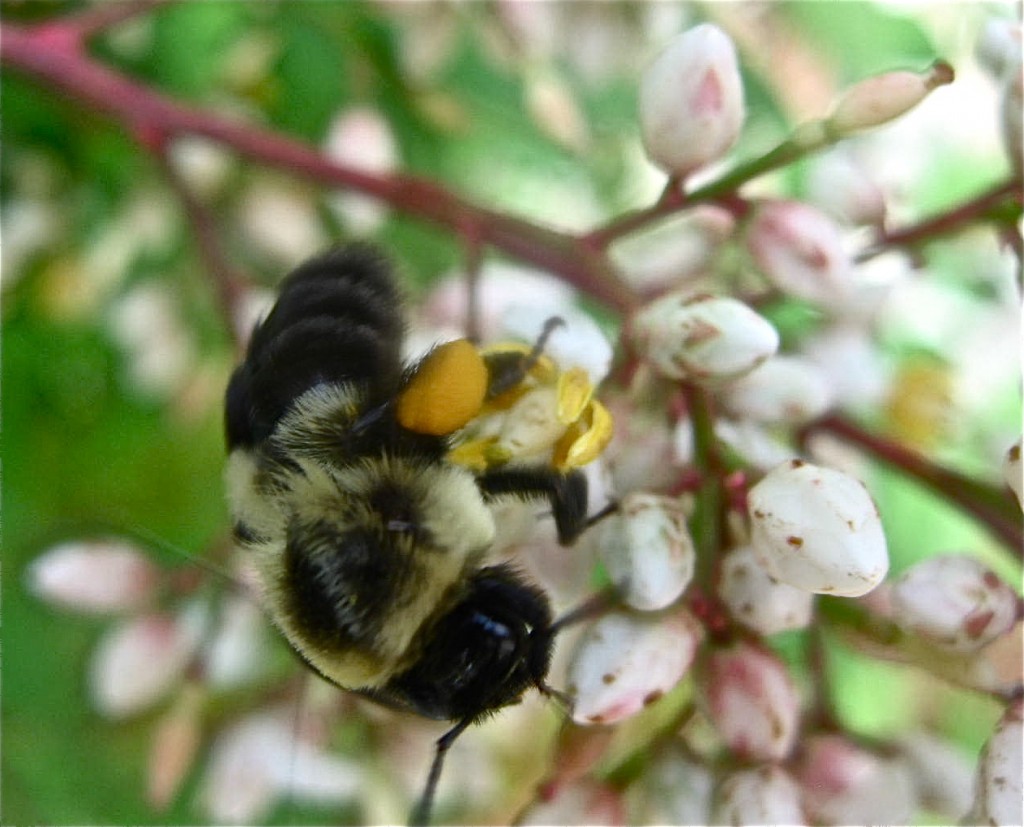 As I’m there on the ground, recording this rhythm, the title and first lines of my book, Lemon Trees and Bumblebees, write themselves. These little buzzers are just being greedy in slurping up nectar to feed themselves and their colony, but they’re really doing us a huge favor. This seems magical, the more I think about it. I remember the excitement of our grandson, Brock, who at three couldn’t wait to tell us, “I have discovered the best food in the world! It’s honey! Have you ever tasted it?” I really need to explain this miracle of pollination for children.

Our lemon tree had given us many dozens of lemons; and what child doesn’t like cold lemonade on a hot summer day? I had my title, as well as the beginning and ending of the story. Back in my study, I pulled books from my shelves; among them, Henry Thoreau’s Faith in a Seed, Rachel Carson’s Silent Spring, Mark Winston’s Nature Wars, Stephen Buchmann’s and Gary Nabhan’s The Forgotten Pollinators, and others. The internet also provided much rich research. Most children really have no idea how they get the foods they love (other than at WalMart, as one little boy said), or how much science is involved in things we take for granted daily. This book HAD to be accurate, with a complex concept introduced to early elementary children in easily understood language, and in a way which might spark lifelong interest in science and nature. Above all, it had to be fun! If it would appeal to the natural curiosity of children and make them ask questions, it would meet my goal.

To verify my practical observations and research behind my writing, it was time to phone a county extension agent to be sure my horticulture references were on track. Then I asked if he had any suggestion for an entomologist who might discuss the lives of bees with me. That’s when he gave me the name of Dr. Blair Sampson, a research scientist with the USDA. Within five minutes of the first phone call, I knew the project was off and running.

Blair listened to my ideas for the book and then “knocked my socks off” when he said, “It just so happens that I’m also an illustrator.” And what an illustrator! But would a scientist/artist who had published and illustrated scientific literature be able to make the leap to entertaining children’s book images? We met over lunch at my house, and he brought me one of his paintings of baby otters, part of his renderings for family and friends. 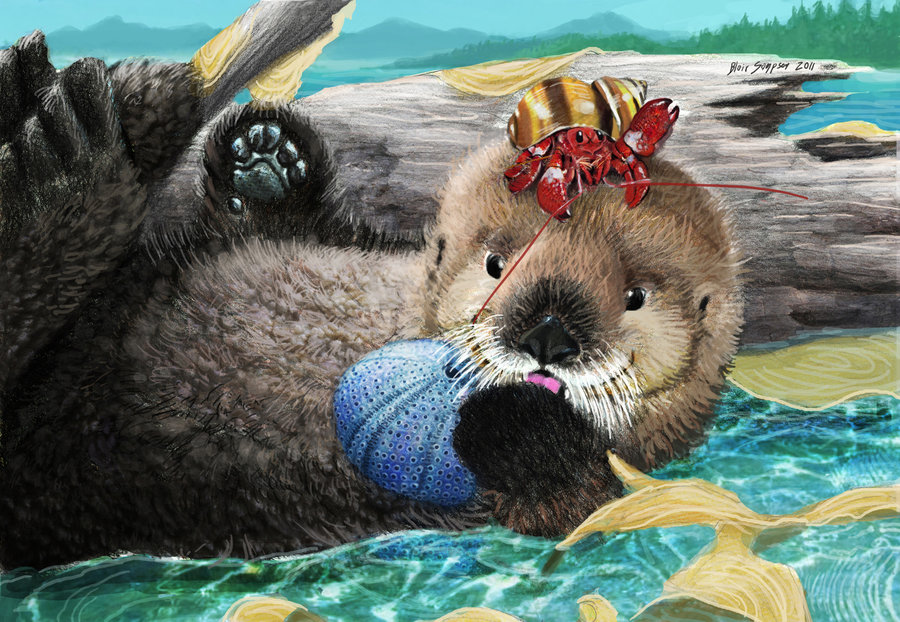 His animals are drawn with great detail in playful activities, with just the happy expressions needed for my book. I soon learned that he had grown up in Nova Scotia and had considered university study in art before deciding upon a scientific career.

Blair has taught me more about many species of bees, their anatomy, their habits, and their origins, than I could have learned in many weeks of reading. His research focuses on long-term bee studies in the wild as well as in controlled laboratories. He has shown me his on-going lab work, patiently and enthusiastically answering my dozens of questions about the intricacies of pollination, and the interaction and interdependency of bees and plants. He is one of those academics who radiates wit and contagious passion for his stewardship and study of a process which is vital to our survival long-term.

Many conversations followed our first meeting, with each of us trading sketches and ideas about how best to interpret my manuscript. For instance, I wanted the first pages to picture the “magic” of something taken for granted by most; so we had some fun with a magic act as well as a pirate bee on his ship, hunting for the “buried treasure” within the lemon trees. Also, I wanted the lemons to “grow” on a branch from page to page to show color and size changes. Blair interpreted my vision as quickly as I expressed it. One page shows an Orange Dog caterpillar (larva of a giant swallowtail butterfly) looking very pleased and proud of himself. Little details in the illustrations ideally tell as much of the story as the words themselves. Images and text in any children’s book should be as symbiotic as the relationship of bees and lemon trees in this story.

My resulting children’s book presents an early introduction to the process of pollination, with Blair’s colorful illustrations which are anatomically correct, except for their irresistible smiles and big bright eyes. From lemon blossoms to lemonade, the ending is one which everyone from kindergarteners to senior citizens will recognize. To encourage talks, there are pages with more about trees and bees, an audio/video clip, a glossary of new words from the story, and recipes for lemonade and edible “bees.” Lemon Trees and Bumblebees is available on the Apple iPad, iPhone, iPod Touch, Amazon Kindle, Barnes and Noble NookColor, and Kobo readers.

Here are a couple of illustrations from the book, developed from the first thumbnail sketches. The black and whites show the initial sketches, and the colored drawings are some of the finished pages waiting for me to place the text. 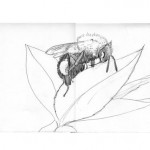 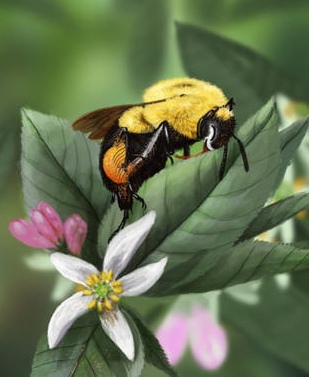 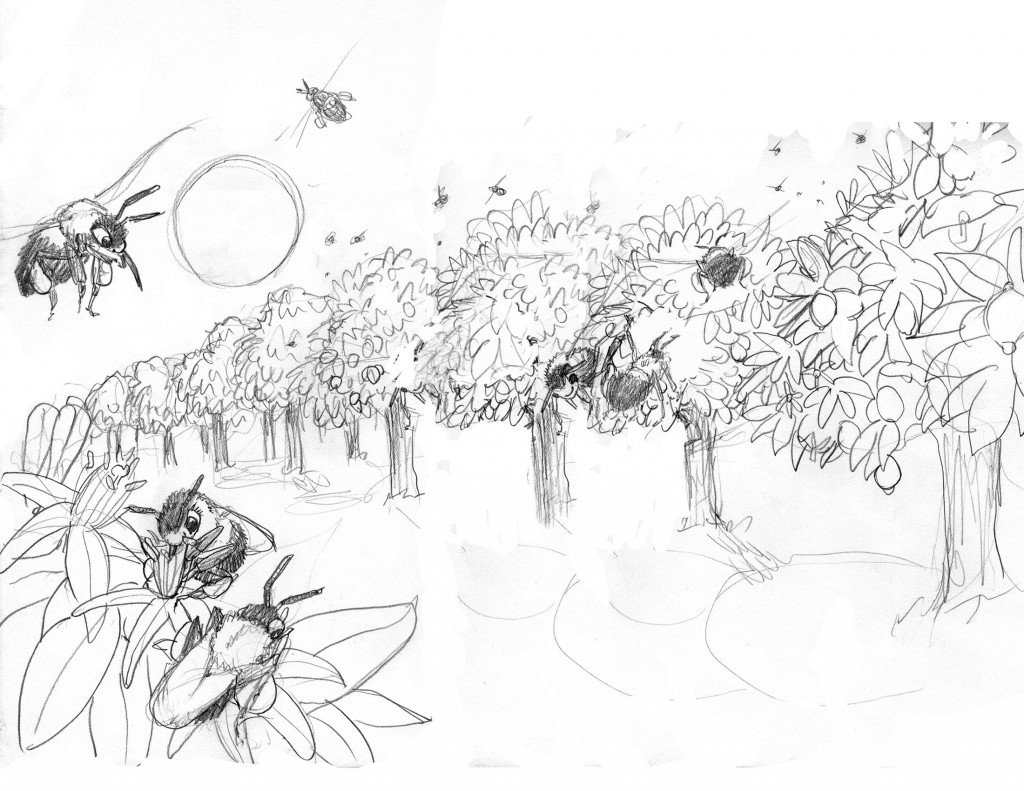 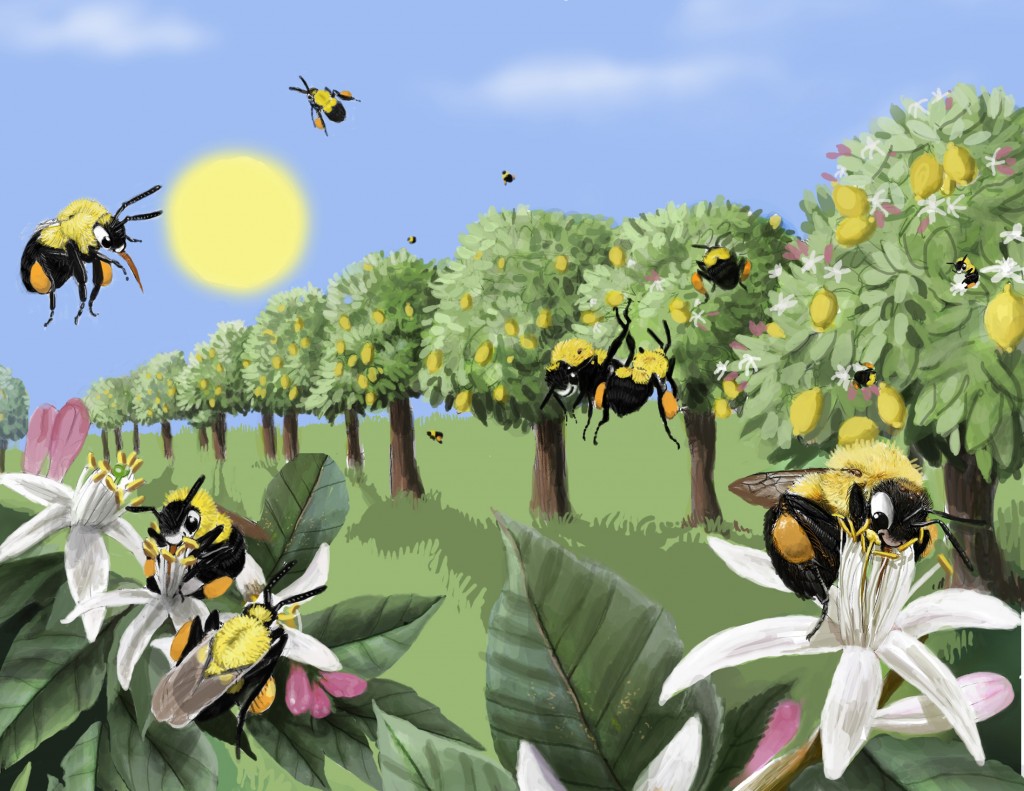 Other books, both fiction and non-fiction are in the works. Here with all of you, day by day, I will share their development, as well as inspiration, writing and marketing methods, and resources which have helped me. I welcome writers of all ages to read my struggles and successes in order to navigate your own book ideas and progress. Comment and let the rest of us know; we’re all roving reporters discovering features along the reading (and writing) road.

What are the odds that the connection with Blair would have taken place just as I was polishing my manuscript? I have to think that it was just meant to be. There have been other lucky forks in the reading road which I have taken to chase bears or rescue migrating birds, but these are tales for another day. For now, I am excited to talk about bees who make honey while they are flying, along with other amazing feats – and maybe share a glass of lemonade with some of my readers!

4 thoughts on “Crossing the Bridge”